How do we show that something matters. When the Black Lives Matter movement started, I remember thinking it was a little basic. I mean all you want is recognition that your life matters? It seemed like such a low bar to shoot for. I have a hard time seeing how not wanting to be killed by the police is an acceptable goal. That’s a baseline expectation that all of us should be able to have. It also means that we aren’t moving toward anything. 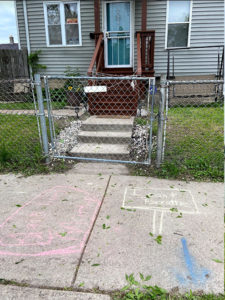 The gray house is where my two friends, father and son, Big Robert and Old Robert used to live before they passed away. The gray house is close to the south end of our block and we live on the north end of the block. We live less than a block away from them. They were living in our house when we bought it 14 years ago. Old Robert’s daughter bought that house right when we bought ours and the two Roberts moved in with her about a month after we moved in. Just like every other person in our neighborhood, they were black.

Family of the Roberts still live in that house. I smile when I run by there. It’s a nicely redone house with a fenced in double yard. The yard is always well maintained. There is never anything rowdy going on there. Coming home yesterday, I noticed what was written in chalk on the the sidewalk. In yellow it says “I can’t breath” and in hot pink it says black lives matter.

Two houses down from the Roberts a man was murdered about two weeks ago. Before the shooting the red and 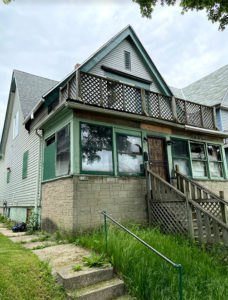 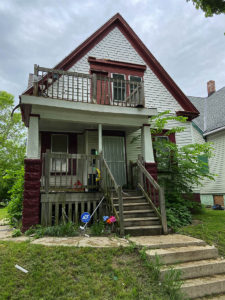 white house always stunk like weed. It was bad. Cars were constantly coming and going. It was drug house. I live on the other end of the block and I knew it was a drug house, I can’t imagine Robert’s family not knowing what was going on there. We had a drug dealer living in a house two houses down and it was obvious. I spent a couple of hours trying to get the police to come and do something about it, and got nowhere. I was told that unless I got them to show up right when a deal was happening, they couldn’t do anything about it. So, we just had to wait in fear for a couple of months until the guy moved out.

The green house, the one with the boarded up windows on the side, was the drug house before the white and red one. In this post about the Roberts, I talk about my experiences with the Roberts. In there I mention that they could have lived somewhere else, but chose not to. Old Robert had a pension from the city and Big Robert was disabled. They could have afforded an apartment on the East Side. Besides deep rooted mass segregation by the residents of Metro Milwaukee, I don’t know why the black neighborhood is on the north side and the hispanic neighborhood is on the south side. For some reason Robert chose not to live outside of the black neighborhood. That means something. In the very least it means that this was a better option or it was his best option. At the very minimum it means it was the best option in the menu of options that he felt were appropriate for him. Black people in Milwaukee live in the black neighborhoods.

I don’t have an issue with that as long as those neighborhoods are decent. I have met almost no one that isn’t shocked that we live here. They are shocked, in part, because the neighborhood looks like a dump and sometimes there are drug houses and murders on the block. It is obvious to them that we can do better. We don’t have to live here. We could chose to live somewhere else. We have said from the beginning if it is good enough for our neighbors then it is good enough for us. It isn’t fair that they have to put up with the annoyances or the underlying fear that something terrible might happen, even though it rarely does.

We have had multiple people reach out to us to see if we are ok during the George Floyd protests. They have a right to ask and it’s kind that they are concerned. It shows that we matter to them. I wonder what message is being sent to my neighbors. I wonder if they have any white people reaching out to them to see if they are ok. I wonder if they feel like they matter. I know when we had the drug house two houses down from us, I felt helpless. There was nothing I could do except wait and stare at every car that pulled up to buy drugs hoping I would make them feel bad about bringing that shit into my neighborhood. I felt like my life and well being didn’t matter. That situation lasted about a month. I can’t imagine feeling like that all of the time.

It doesn’t surprise me at all that there is mass protesting after the murder of George Floyd. I know what some of the houses my neighbors are living in look like on the inside. If I was stuck inside one of them for the last three months with a drug house next to it feeling helpless and praying for something to change I would feel like my life didn’t matter. Then when that change is a violent murder 50 feet from my front door, I would want to protest too.

We subsciously show what matters to us based on our actions. We allow neighborhoods like mine to exist. We allow the children there to live in or be surrounded by poverty. We allow those children to be sent to schools that are failing. Then we wonder why many of them fail to assimilate to the general norms of our collective society and punish them for it. Another black man or women could never by murdered by the police again, but does that mean that they really matter. What would the collective “we” need to do to actually show that black lives matter?