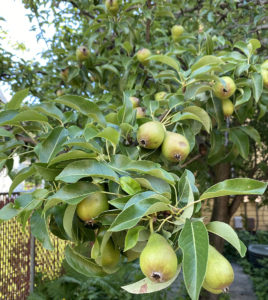 This is Charlie’s pear tree. Charlie was the neighbor outside cutting his front grass with a scissors so it was perfect.  He was the type of person when I walked by, that would invite me into his backyard to show me a new plant or how the pears were doing on his tree.  He was such a caring man and talked about how successful and wonderful his kids were often.  When I met his daughters last year, I told them that I thought they both worked for NASA because Charlie would talk about them so highly.  We were able to purchase Charlie’s house last year due to his decline in alzheimer’s and we are continually amazed at the care he took on it.  Both Alex and I will find things that make us smile and think of him, like a beautiful peony bush in the corner of the backyard or all the hardwood that was kept so perfect.  Charlie died yesterday and even though I’m heartbroken, I know his stories will continue as well as his beautiful legacy.  I feel so lucky that I got to hear his stories of living in his home for more than 70 years.  He would tell me stories of before the highway was put into place and what it was like to sneak into Borchert Fields.  I wish I would have asked him more, asked him what it was like to live through White Flight or the 1967 Milwaukee Riots.  Last year his pear tree didn’t produce any pears and his daughters through it was because he wasn’t there to care for them.  I think his tree this year is a sign the abundance of love people had for him and he had for others.  I am thankful that I get to continue to see his love for his home and Charlie’s memory lives on.