I believe there are two main drivers of segregation. The first is racism, which is what separated all of us in the first place.

Here are three overly simplified ways racism has been used to separate us:

Slavery – Whites have the power and control, blacks do the work.

Jim Crow Laws – Whites decide what they will allow blacks to do, blacks are forced to go a long with it.

White Flight – Whites use resources to physically move away from cities that blacks are now moving into.

The second driver is poverty. Having aspirations of using wealth to create what seems like a better life for yourself, isn’t a bad thing. Working hard, living within or below your means and accumulating wealth to provide a higher quality of life for yourself and your family is just fine. The only problem is there aren’t $400,000 houses in the ghetto. If you want one of those, you can’t live in a poor neighborhood. Almost no one actively works to move down in neighborhood. It is also somewhat justifiable to want to avoid the inherent frustrations associated with living in an area of poverty. If you believe that our actions are just an attempt to meet our needs, poverty forces you to meet you needs with little or no resources. This makes it hard to be considerate of others since you are hyper focused on meeting those needs.

Here is an example: 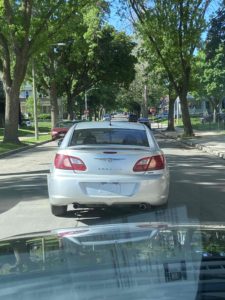 The car pictured is moving forward at 5 mph. Its flashers are on and a minute before I took this picture, it stopped to pick someone up. There is no license plate, not even an older, faded temporary one. The car is moving slow because the passenger side front tire is flat. For some reason the driver is keeping the car in the middle of the street perfectly positioned to block someone from driving around him. We were stuck behind him for about 4 minutes.

It’s easy to become frustrated when you are only driving 5 mph, especially when the cause of your sloth-like pace is someone that is already not following the social norms of properly licensing their vehicles. A vehicle with no plates is probably not insured which, for someone with no money, isn’t a big deal, but is generally not considerate to the other drivers since they are not adhering to the rules that the rest of us are. But what else should the driver do? He has a flat tire, most likely no spare, and realistically can’t afford a tow truck. He needs to get home, so he is working on making that happen, unfortunately, at the expense of those stuck behind him. This type of thing doesn’t happen in wealthier areas. If you get a flat, just call AAA and get it taken care of.

It is because of these two things, racism and poverty, that my poor, black neighborhood became segregated in the first place and will most likely stay that way unless more work is done to shed light on the injustices imposed on my neighbors through decades of segregation.

Here is one injustice:

In 2015 the graduation rate for Milwaukee Public Schools was just above 58%. In my professional experience as an educator working with at risk high school students, only the most disengaged, disenfranchised individuals fail to graduate from high school, given the access to GED Option 2 programs within school districts. If almost 42% of students are disengaged or disenfranchised to the point of being considered a non-graduate, we have to look at that as a symptom of the places and experiences the child is growing up inside of.

A high school diploma is a generally accepted first step to employability. Since achievement gaps clearly exist between white and minority students, we can approximate that half of the black students are non-graduates. Many or most of them won’t be employable in jobs that provide livable wages.  This is an overly generalized synopsis, but a system that takes in poor, black kids and consistently produces poor, black adults perpetuates the cycle of poverty, which creates more individuals for non-poor whites to segregate themselves from, which contributes to the cycle of segregation. It is a wheel that many of my neighbors and their children will be stuck in for the rest of their lives. Without access to education which can be reasonably expected to produce the same types of outcomes as white suburban schools, the cycle won’t be broken.